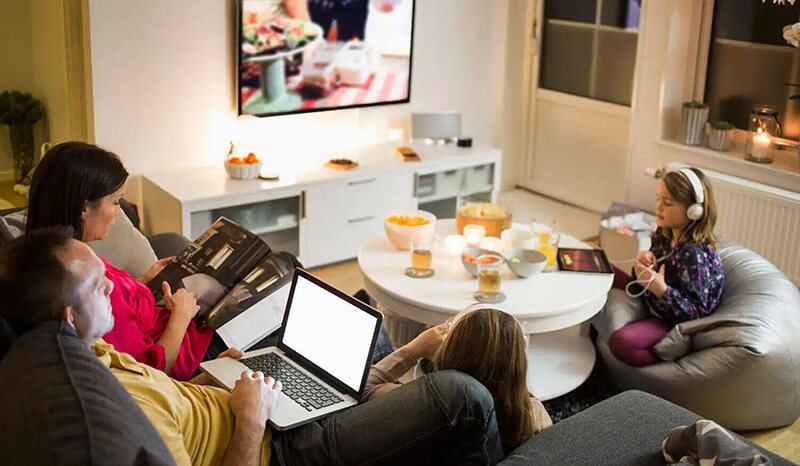 All Australians need to use electricity to keep their house running and their lives moving, but above all, we want to keep our family safe, here at Sarros Electrical we’ve put together a recommendation of the top 5 things you should never do with power boards to protect your home and family.

1: Don’t give into the temptation to Overload!

We’ve all realized at one point or another that our house doesn’t have enough power points to support our ever-increasing demand for electricity, however chaining power boards together is never the answer.

Known as “Daisy Chaining” in the electrical industry, this process of plugging in one power board to another causes more electricity to flow through the first power boards than originally designed.

As a result of excessive electricity flowing, more heat is created which unfortunately can lead to fire hazards in the power board. Just think of electricity as a roadway. The mains power connecting your house is the freeway. The wiring in your walls are the main roads, and your power board is a single lane street. The more things you connect to a power board, the more traffic needs to flow through it. Don’t connect all your appliances to one power board – it’s like having a single lane road feeding into the entire city, everyone will get angry in the traffic and melt down – literally!

A good rule of thumb is, that the number of outlets on a power board is the absolute maximum number of appliances that can be plugged in at any one time, even then, err on the side of caution, go one less where possible!

Every power board has a maximum current rating based on the internal structure and components of the board, all boards are legally required to have this information on the casing.

Although some power boards can be used outdoors, generally speaking, a power board is only designed for indoor use. Why? Being outdoors exposes the board to harsh weather and water, the nemesis of any electrical circuit.

Another good idea is to avoid plugging boards in anywhere where water might unexpectedly be lurking, such as in your bathrooms or near your kitchen sink. It sounds obvious but it’s an easy oversight and accidents continue to happen with electricity and water.

Additionally, and let’s be honest, power boards and the many cables around them are rarely a good-looking item to have lying around. However, hiding them under carpets, behind furniture, or in closets is never a good idea.

Covering power boards or placing them in tight places limits the surrounding airflow. This can cause heat to build up in the area. It also makes it easier to accidentally cause damage without realising, such as accidentally kicking or placing furniture on top of power boards. This can create hidden shock and fire hazards that’s especially dangerous to any children playing nearby.

Every so often it’s a great idea to take a look at all the power boards in your house to ensure they’re in good working order.

Have you noticed any of the following warning signs on your power boards?

If so, it’s definitely time for an immediate replacement – out with the old, in with the new!

Power boards these days aren’t overly expensive, but even then, why put you and your family at unnecessary risk? Take a look, especially in those not often looked at places such as behind the TV. You might just be glad you did…

4: Don’t overwork your poor power board!

Certain appliances are designed to be plugged into a power board, others to be plugged straight into a wall socket. Knowing the difference is critical.

Appliances that do any of the following shouldn’t be plugged into a power board, especially power boards with many other devices plugged in already:

Not always, but generally the following kitchen and beauty appliances fit this bill, such as:

In 2018, electrical faults accounted for the highest number of housefires in WA, according to the Department of Fire and Emergency Services (DFES).

So what can you plug in to a power board? Anything that doesn’t draw excessive amounts of current or does not generate a large amount of heat, for example:

Fortunately, power boards in Australia have to pass rigid compliance and are thus safer than their cheap overseas cousins (you’ll have noticed this if you’ve ever been to Bali!).

When purchasing power boards, it’s always good to consider power boards that have surge or overload protection. This ensures that you won’t accidentally overload a power board and create a safety hazard.

So what should we do with our power boards?

Power boards were created for convenience, allowing us to plug multiple appliances in one location. When used correctly and maintained properly, they are a safe convenience.

Just remember, the more appliances you plug in to a power board, the more electricity must run through it. Your power board is like a single lane street; don’t expect it to run freeway level traffic! So don’t plug in devices that are overly demanding and don’t plug in too many devices.

Before you use a power board, make sure the board is:

Ideally, use a power board that has:

A permanent and safe solution to power boards

If you’re using a power board in a permanent setting, such as behind the TV or behind the fridge, you may want to consider the proper installation of more power points (also known as GPU’s).

Sarros Electrical have extensive experience in upgrading electrical wiring and installing power points to ensure all your electrical needs are met a safe and compliant way.

Call us, Perth’s trusted electricians if you’re considering power point installation or any of the following related services:

WA family owned and operated, all our workmanship is fully licenced and guaranteed for life.

Meanwhile, don’t take electricity for granted but continue using your power boards in a safe manner.

The page you requested could not be found. Try refining your search, or use the navigation above to locate the post.

Sarros Electrical - Ready to Help You!